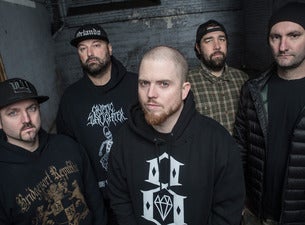 Hatebreed is considered an influence on hardcore, metalcore, and heavy metal, in no small part because of punishing live shows that lend themselves to circle pits. Led by gravel-voiced frontman Jamey Jasta — who favors an aggressive, speak-singing delivery and a galvanizing stage presence — the band unleashes sludgy music driven by piledriving riffs and drums.

Early on, Hatebreed toured with Slayer, Deftones Napalm Death, and were also on heavy package tours, including the 2004 Unholy Alliance Tour that also featured Slayer, Slipknot, and Mastodon. Later years have found Hatebreed teaming up with DevilDriver, Cro-Mags, Obituary, and Terror. The band is also a regular presence at metal and hard rock festivals, including Download, Ozzfest, Mayhem, and Wacken Open Air, as well as the Vans Warped Tour, Resurrection Fest, and Bloodstock.

Led by frontman Jamey Jasta, Hatebreed formed in 1994 in Connecticut, and released a well-regarded three-song cassette demo and several singles (including a split 7-inch with Integrity) before debuting on Victory Records in 1997 with the full-length Satisfaction Is the Death of Desire.

The band released their following two albums, 2002's Perseverance and 2003's The Rise of Brutality, on the major label Universal Records, before landing on heavy music mecca Roadrunner for their 2006 worldwide breakthrough, Supremacy, which charted across Europe. A self-titled 2009 full-length released via eOne reached the Top 10 of Billboard's Hard Rock Albums chart, while 2013's Razor & Tie–released The Divinity of Purpose fared even better: that effort reached No. 1 on the same chart. In 2016, Hatebreed released The Concrete Confessional via Nuclear Blast, which hit No. 2 on the Hard Rock Albums chart and No. 25 on the Billboard Top 200. Although the band has weathered multiple lineup changes over the years — Jasta is the sole remaining founding member — Hatebreed remains committed to pushing music forward into new and heavier directions.