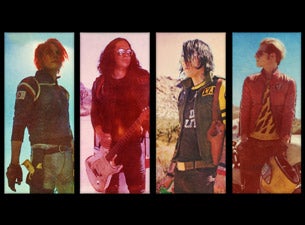 About My Chemical Romance

MY CHEMICAL ROMANCE are bringing their World Contamination tour to Australia for BIG DAY OUT and it is going to be explosive!!

Now celebrating 10 years as My Chemical Romance, they broke out of the Jersey punk underground with 2002 debut I Brought You My Bullets, You Brought Me Your Love, then 2004's Three Cheers for Sweet Revenge, before heightening the drama with 2006's game-changing rock opera The Black Parade. Just when fans thought they couldn't take it any further, 2010's Danger Days: The True Lives of the Fabulous Killjoys created a whole new world - a dystopian, disco-punk future where life is short, cars are fast, and where a raised voice is a lost soul's best defence.
- "‘Danger Days' is a sensational record." - Kerrang!
- "Utterly fantastic. This is the album they were born to make." - NME
As if they needed any more endorsement, in 2011 MY CHEMICAL ROMANCE were blessed with such cultural honours as having their tune Sing performed on Glee, and being joined by legendary Queen guitarist Brian May on stage at Reading Festival to perform We Will Rock You and Welcome to the Black Parade.
Still, no matter how much changes for singer Gerard Way, guitarists Frank Iero and Ray Toro and bassist Mikey Way, one thing remains true - their legion of dedicated followers. As The Guardian put it: "The bond between the New Jersey pop-metalists and their fans is one of those phenomena that outsiders just don't get."
"They slayed, they dominated, they annihilated and controlled. MCR know they can veer in whatever direction they like and within a few seconds they'll own everyone again." (Rock Sound, October 2010)
Australia, prepare to be transported to the year 2019...
Advertisement