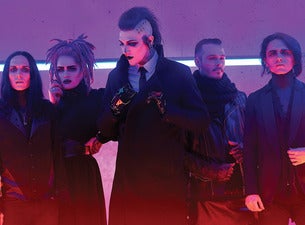 About Motionless In White

MOTIONLESS IN WHITE WITH CROWN THE EMPIRE

TUESDAY JUNE 20, 2017 – Candles, tattoos, and distortion! MOTIONLESS IN WHITE will embark on their first national headline Australia tour this September in support of their new album Graveyard Shift.

Tickets for all shows including Meet & Greet Experiences go on sale at 10am Friday, June 23.

An exciting 48-hour pre-sale is available exclusively for Telstra customers from 9am Wednesday, June 21 until 9am Friday, June 23 (local time). Head to Telstra.com/music for details on how to purchase.

Motionless In White are one of the most exhilarating bands to rise to fame in recent years, taking the metalcore world by storm with their unique offering to the genre. The band’s latest album, Graveyard Shift, was released earlier this year by Roadrunner Records and features the hard and fast anthems “Loud (Fuck it), “Rats” and an appearance by Jonathan Davis of Korn on the track “Necessary Evil”.

Headed by frontman, Chris ‘Motionless’ Cerulli, Motionless In White came out swinging from Pennsylvania in 2005. Their first album, Creatures swiftly gained the attention of the metal community and was followed up by the hugely popular Infamous in 2012. High on the momentum of their success (and a few line-up changes), Reincarnate was unleashed and gained the #1 spot on Billboard’s Top Rock Albums Chart. Their fourth full-length album and first for Roadrunner Records, Graveyard Shift continues to show the world why they are the most gut-punching, electrifying metal acts to date.

Joining Motionless In White are Texas metalcore quartet, CROWN THE EMPIRE. The four-piece outfit skyrocketed to popularity in 2010, delivering a crescendo of down tuned guitars and electronic samples. Having already played Soundwave and the Warped Tour in Australia, Crown The Empire’s return is keenly anticipated by their ecstatic fans.

Motionless In White’s fast paced, heavy hitting legacy translates perfectly to their on-stage presence. After clocking up years touring on the road and sharing stages alongside Slipknot, Marilyn Manson and Korn, they have fine-tuned their sound to perfectly replicate their insanely high energy, head banging set list. With their unique guttural breakdowns, haunting melodies and devious