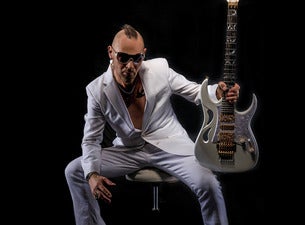 Pseudo Echo are one of Australia’s leading recording and touring acts, having pioneered the eighties with their stylized look and electro sound, establishing themselves as one of the most iconic and influential, multi award-winning bands in the country. At their peak they were awarded “Australia’s Most Popular Band”, as well as Brian Canham taking the crown for “Australia’s Most Popular Male Performer” from Michael Hutchence.

Famous for their world-wide No.1 smash hit “Funky Town”, the band has released a string of unforgettable Top 10 electro-pop hits including “ Listening”, “A Beat for You”, “Don’t Go”, “Love An Adventure” and “Living in a Dream” ...

Now Pseudo Echo take you back in time, with the highly anticipated release of their ninth studio album “1990 The Lost Album Demos”.

Following their sold out show earlier in the year, Pseudo Echo return to The Palms for a two hour show with synchronized visuals ... playing all the hits and more!