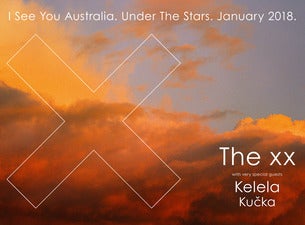 Fresh from playing to a packed amphitheatre as Splendour In The Grass headliners, Frontier Touring, Handsome Tours and triple j are thrilled to announce that British indie trio The xx will return to Australia in 2018 for an East Coast headline tour.

The xx will treat audiences to their unique dreamy sound in stunning venues in Melbourne, Brisbane and Sydney next January, joined at all shows by special guests Kelela and Earl Sweatshirt.

Frontier Touring and Handsome Tours regret to inform that due to the recent passing of Earl Sweatshirt’s father, he must regrettably cancel his forthcoming appearances as support for The xx East Coast Australian tour this month. We sincerely apologise to those affected by this cancellation and send our sincerest condolences to Earl at this time.

We are pleased to announce that KUČKA will be joining Kelela as a support on The xx’s East Coast tour kicking off in Melbourne this Saturday (13 Jan). Hailing from Perth, KUČKA's addictively ethereal electronic-pop has taken her around the globe in a whirlwind 18 months, leading to collaborations with Flume and Fetty Wap, and live supports for Vince Staples, NAO, Mura Masa and Mount Kimbie.