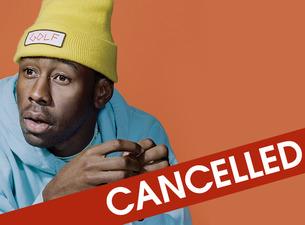 About Tyler, The Creator

TYLER, THE CREATOR IN CONCERT:

Hip hop innovator and Odd Future figurehead Tyler, the Creator had another huge year in 2013, releasing his sophomore album Wolf to a No. 1 spot on the Rap Albums chart and headlining the second annual Odd Future Carnival alongside Frank Ocean. According to Tyler, though, the standout moment of the year was sharing the stage with Kanye West for a rendition of "Late," a track Kanye rarely performs live. With luminaries from West to Erykah Badu hailing his inventive, offbeat style as a game changer, Tyler, the Creator is poised to deliver another series of mind-expanding performances on tour in 2014.

Born and raised in Los Angeles, Tyler, the Creator grew up immersed in a creative street culture that sparked his early interest in fashion, music production, and rapping. In 2006 he founded the hip hop collective Odd Future Wolf Gang Kill Them All, joining Earl Sweatshirt, Left Brain, and a host of other talented up-and-comers in the creation of a unique leftfield approach to the genre that earned the crew a huge following. After several underground releases, Tyler made his mixtape debut with 2009's Bastard, a self-produced tour de force that landed on Pitchfork Media's Top 50 Albums of 2010. His studio debut, 2011's Goblin, would prove an even bigger success, topping the R&B/Hip Hop Albums chart and earning him mainstream recognition virtually overnight. With the 2013 release of Wolf, Tyler firmly cemented his role as the dominant voice of a new generation of hip hop artists.

"Tyler was awesome, you could tell he was really having a good time and that he loves what he does. "Yonkers" and "Sandwiches" were amazingly well performed."

"Tyler always puts on an epic show! I can't wait to see him again!"

"His energy level is absolutely unbelievable, and he interacts so well with the crowd. Such an amazing performance..."